Human Systems Integration (HSI) is a critical component in improving driller performance but one that has been overlooked across much of the drilling and completions industry. It is an expertise that incorporates multiple facets that cover the interaction between humans and machines and incorporates Human Machine Interface (HMI), Human Factors Engineering (HFE), training, organization and more.

The drilling systems automation roadmap addressed critical areas including manpower, personnel, training, safety and occupational health, and human factors engineering—the practice of designing products, systems or processes to take proper account of the interaction between them and the people that use them. Available to download HERE.

Levels of Automation Taxonomy (LOAT) is a matrix of human information processing and systems functions against levels of automation. It provides a framework to identify the best levels of automation in a given context and to determine a logical transition of manual to various levels of automated operations, which, when combined with the application of HSI, defines the steps of the progression. The path to a LOAT suitable for adoption for drilling systems automation has been laid out by the Single European Sky ATM (Air Traffic Management) Research (SESAR). It is grounded on the seminal work by Sheridan and Verplanck—the first to introduce the idea of automation levels—and on the subsequent work by Parasuraman, et al, which defines four cognitive functions to be supported in a human-machine system.The four cognitive functions are based on a staged model of human information processing that can be translated into equivalent system of cognitive functions—information acquisition, information analysis, decision and action selection, action implementation—for automated systems

This LOAT is designed through the following principles:

An overview of the LOAT for Drilling Systems Automation. The fully detailed LOAT is available to download HERE. 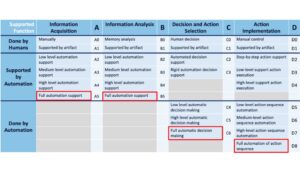